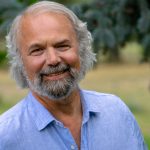 A lot is going on in the world right now. I know there is a lot under way in my world. I am not writing this article today because I am oblivious to that. I am writing it because this is my answer to the world in which I live.

What is the holy city? It is difficult to speak of anything of significant meaning and value—of some kind of existential meaning—without using poetry. I am not just speaking of poetry as such. I am speaking of all the elements of poetry that appear in all facets of our life if we have the eyes to see them.

How else would you speak of something of transcendent meaning that is invisible until someone experiences it and gives it form? Through poetry and all that is conveyed through the symbology and rhythm of poetry, we can speak of things invisible. We can talk about things we cannot quite see with our physical eyes, even though these invisible dimensions of reality may be expressed in material things.

The expression holy city portrays the very source code of life, the spiritual DNA of a human being and of all humankind.

This is from a traditional African American spiritual.

The lyrics echo John’s description of the holy city in Revelation:

And the wall of the city had twelve foundations, and in them the names of the twelve apostles of the Lamb.

What is this, if not poetry—words that speak of an invisible pattern that could be experienced by people? Otherwise, the holy city is stone and brick coming down from God out of heaven, crashing down upon the heads of human beings. Obviously, a literal interpretation of the verses makes no sense.

My book, Becoming a Sun, speaks in great detail of this pattern of twelve, with three gates in each of four directions. It depicts it as a sun cross. In each of the four directions, there is a relationship with the three other directions—three gates. This is a different poetry referring to the same source code of life.

When we speak about the holy city coming down from God out of heaven, we are talking about the emergence of the source code of Creation into human experience. In John’s excitement, he used his own name: I John! I saw this invisible source code coming into my own experience!

There are all kinds of other things at many levels that take up human consciousness—globally, locally, and personally. And, of course, we pay attention to the things of our life, tending to them as best we can. And yet, has anyone yet achieved the feat of making all those things come out perfectly? In the larger scheme of things, all things do. But in the immediate, there is all that is unfinished and limited, and all that comes undone.

With eyes only on that, we can lose touch with the source code of Creation, the holy city, which contains the unfolding holistic pattern for us as human beings and for our planet. And so, in a state of distraction, there is no pattern for us or the world to be a part of. All that is unfinished, incomplete, and separate in our life continues to languish in that state, no matter how hard we try to make it all come together. We are then Atlas, carrying a broken world on our shoulders.

Obsession with making everything turn out right is the first distraction from the source code. But then, the suffering that results from this obsession becomes the second distraction. We can become preoccupied with the painful elements of human experience at all levels.

In facing problems, we can end up creating more problems. We can create an atmosphere of fear and anxiety. Then we are not only using our minds to try to solve the day’s issues without reference to the perfect pattern of Creation. We are living in the atmosphere that gets created by all the suffering we have created.

Looking at the world, how much of that is going on? Without reference to the source code, there are endless rounds of reaction to what others are doing and patterns of revenge that are a part of that. It happens between individual people and among cultures and nations. It seems to be never-ending. The karma generated from that activity builds and builds, and then people act out of that bad karma.

Where, in all of that, does someone look up and see the perfect source code? It is trite to say but nonetheless true that every day is a new beginning. Every moment is a new beginning. And why? Because every moment, we can look to the source code of love, the source code that tells us what is true of ourselves and one another. And that is what forgiveness is all about, is it not? Forgiveness is the constant opportunity to look up and start fresh.

We are not foolish people. So, we understand that bad things happen in the world and that people do bad things. Some people demonstrate bad character. And still, we have the greater wisdom to start fresh from the source code of life and, if need be, remind that other person of the source code. Forgive them, love them, and remind them of the holy city. Remind them to look up. And what is the best way to remind somebody else to look up? To look up oneself. How else do you do it?

From a practical standpoint, some things have to be dealt with. If there is a bully in the sandbox, you have to do something with the bully. But from what perspective? Where are you coming from as you do that? And are you constantly referencing the source code, no matter what you do?

There are bullies in the sandbox of the world. Sometimes, there are bullies who come around Sunrise Ranch. Just recently, we have somebody who is stealing from us. There are actions to be taken when a bully is in the sandbox. But we are never going to forget who we are and even who that person is. We are going to address the situation in a spirit of forgiveness. That does not make us weak—it makes us strong. We are constantly referencing the holy city and letting it appear.

Who is bringing the holy city to humankind? As you look around the world, do you see somebody doing that? Or does some group of people have it covered? They covered it, and you can just be about what you need to take care of for yourself? Somebody else is bringing the source code into the world through consciousness, so you do not have to do it. You can just depend on them to do it. If you know of such people, tell me. I want to join them.

That is not what I see. I see a vast, urgent need for humankind to remember the source code. The need relates to every facet of human experience—all twelve gates of the city, the twelve spokes of Barbara Marx Hubbard’s Wheel of Co-Creation. That was a depiction of the holy city. In the middle of it was “the heart of the hub of the wheel,” as she called it. We tend to call it the Holy of Holies. If there is to be the source code for all the facets of human experience—health, science, technology, politics, the environment, and everything else—there has to be the heart of the hub of the wheel, from which it all comes. The Holy of Holies is the heart of the holy city.

CNN just obtained a rare interview from Mark Liu, the chairman of the largest company in Asia, Taiwan Semiconductor. The company supplies computer chips to high-tech companies around the globe—Apple, Sony, and many more. It is the world’s leading chip manufacturer.

Chairman Liu described the delicate flow of highly sophisticated information among Taiwan Semiconductor and companies worldwide. He pointed out that an invasion from Mainland China would break this delicate flow and render them inoperable.

That is essentially what happens globally for the world in which we live. The bullies in the sandbox disrupt the delicate source code of life in human experience. You cannot break the holy city because it is ineffable, after all. You cannot get up there and corrupt it, and it does not go away. But it can break the human experience of the holy city if you have a bully in the sandbox.

The first bully in the sandbox we have to deal with is the one in our own head and heart. If we allow the internal bully to take over, self-obsession and fear reign supreme. The bully obliterates our awareness of the holy city.

Here is the good news: We are made to tune in to the source code. We have an innate awareness of it. The problem for so many people is that they took that innate awareness and put it someplace where they cannot find it. It is within the range of their consciousness, but they are not paying attention to it. They are obsessing over all the problems they think they have and all the suffering they are experiencing. And the awareness of the holy city? They are not paying attention to it.

How do we tune in to the holy city? The spiritual uses the word Hallelujah. It is a word expressing acknowledgment, praise, and gratitude. That is how we become more vividly aware of the holy city. It is how the gates of the city are opened. It is how we receive the holy city coming down from God out of heaven.

Praise and thanksgiving for the source code amplify our awareness of it and the opportunity we have to bring it powerfully and beautifully into the world. That is what brings the flow of highly sophisticated intelligence that is there for us, even in the face of a bully in the sandbox.