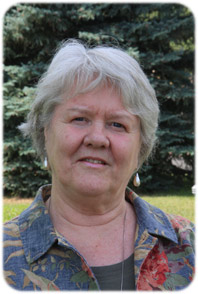 I’ve been thinking specifically about intensity over the last few days. There is no question about the fact that we are living in a time of intensity—there is no rationalizing that one away. It’s very apparent with the strange weather patterns. The many tornadoes recently in Oklahoma were unprecedented in historical memory.

It is said in the 91st Psalm: “He that dwelleth in the secret place of the most High shall abide under the shadow of the Almighty.” That’s where we belong at times like this. And actually, I would say, if we’d had the wisdom we wouldn’t have left in the first place. My friend Ruth Buckingham recently gave me some cocktail napkins printed with the words “Will whoever is raising the high bar give it a rest?” I don’t want to be giving it a rest! I don’t. We worked for this; we came for this. We came to bring and handle this intensity.

At the same time as all these dramatic events are going on around the world, and in our personal lives—I don’t know about you, but I sure have some—there are magical things occurring. There are magical things occurring spiritually on the planet, with the raising of consciousness that’s going on in all kinds of ways. I remember back in the 1960s and 1970s, there was a slogan used: “Consciousness-raising.” I think someone had realized there was this surge of something pushing to come through.

So I would ask myself the question: What is the job of conscious people at this point? It’s actually always been the same job. When things seemed to be all nice and easy and flowing, and there were not too many dramas and minimal intensity, we tended to relax and forget. I don’t believe that’s what is required now. I think we all need to be on the job; we all need to be on duty. That was always so. And when times of intensity come, then we really know that it is so. This is no time to be falling apart. It’s no time to be inconsistent. It’s a time to actually celebrate the fact that what we came for is happening. We have had lots of training, and this is what the training was for—to be consistent when the heat comes on, to be steady, and to be a “still point in the turning world,” as it has been said—at a time when the world really, really needs us.

And as is said in the William Stafford poem A Ritual to Read to Each Other, “It is important that awake people be awake.” So it’s important that we be alert at times like this. I’ve noticed, here at Glen Ivy and further field, that there has been an increase of accidents. This is not coincidence. This is the intensity coming on. We need to be alert; we need to be cautious but not fearful. We need to be prudent. We need to watch.

So there is the need for alertness, the need to be on duty, to be present, to be conscious, to be all the things that we have the training to do. All of these things are being called for in this day. And, along with this, there is plenty of man-made drama. We have the choice of buying into the man-made drama or of acknowledging that as consciousness is rising, as truth is putting in an appearance on the planet, other things are going to be displaced. And guess what the other things are? They aren’t going to be God’s things. They’re going to be the humanly created mind-made things that need to get out of the way to allow reality to put in an appearance, without our ideas and opinions. We may think “That’s not right—that doesn’t work for me.” Whatever it is, get that out of the way and see what magic will occur as a result.

Years ago, a friend said to me, “Heaven is just stuffed with things waiting to come through, if only we’d let them.” So I considered “Why do we not let them?” And the way I would sum that up is that there is an attitude of “I want what I want when I want it and in the way that I want it.” That’s not God’s way. Who is it that’s speaking? That’s not the angel incarnate who came to do something on this planet towards restoring it to balance. That’s coming from a consciousness that thinks it knows. That’s a mind that thinks it knows, that thinks it has the whole picture, which actually is camouflage for self-serving the self-centered identity.

So when what we think we need doesn’t happen, and what we actually need shows up, do we ignore it or disapprove of it and mentally tap our foot, waiting for God to comply with our wishes?

We say we’re interested in unconditional love. In the past I’ve seen unconditional love as being my attempt to love everybody in my world, no matter what. And there is nothing wrong with that—there is something real and true about that. But I had a realization that actually love itself is unconditional. We cannot place conditions on love. That’s the mind trying to control the power that is running everything. That’s not going to work. It just isn’t going to work because it cannot work.

But thankfully there is all kinds of room to change our attitude. It requires trust. As things rev up, as things get intense, trust can be in short supply, because some of the effects of the intensity will directly impact us, and each one can say that. So what? I’m held in the arms of love. It is true that I am, and it is the only place where I can safely place my trust and come to rest.

I remembered a quote last night from Isaiah 55, verses 8 and 9, that I think sums up how it really works:

For my thoughts are not your thoughts, neither are your ways my ways, saith the Lord.

That’s clear, I think. I can’t see any other way to interpret that than as it is put there. Have you ever had the experience of a thought coming into your head that you hadn’t consciously been thinking about? Something that just popped in? I have this regularly—I enjoy it too—and I can’t claim credit for how clever I was to dream up this thought. This thought lands in me and I know it’s true. I do believe that thoughts of that sort, if they’re accurate and true and they carry the essence of love, are coming from that place that was described in those two verses. And I also believe that it is my job to let those thoughts come in, to let them come through me and the consequence of them manifest on this planet through me. Not only do I believe that’s my job, I believe we all signed on for that.

So I want to return to magic. Magic is real for me. I see it every day. But the only way I can see it is if I keep myself from dwelling in the drama, the intensity, the judgments, and all of those things that get in the way of the thoughts that need to be there that are creative. They are of the creative process, they are trustworthy, and they are true.

Magic. You never know what’s going to happen. That’s my experience. That’s where I go, and that’s where the real drama, the true drama, the creative drama is, in allowing that magic to appear through me. I don’t have to make it up—it is going to come through if I let it come through. Let us reveal the heavenly story moving through the intensity and power of unconditional love.

Thank you for your words of very practical spirituality and wisdom; in a way, deceptive in their intensity.
Love is like the Sun which shines forth across our universe – it keeps emanating and does not withhold its bounty.

I feel the privilege and honour of what we are all doing together with so many more people who are not aware of our collective endeavours at this point, and look for opportunities to further bring the magic and intensity in our world letting my life and capacities be brought on line, to become the ‘hot-spot’ for those who need to connect with me.
I join you all in being the ‘hot-spot’ for the global family so that complete transformation can take place.
Thank you for your magic and intensity.