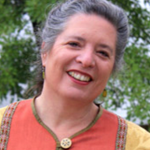 Love is the evolutionary urge. It is animating this world and revealing itself all the time. Today is Easter, a holy day in the Christian church. It is a day that honors the resurrection of Jesus, a man who brought the evolutionary urge in a consistent way. The story of Easter is well known, even by those who don’t celebrate this holy day. Jesus was becoming too popular and was a threat to the authorities. He lost the support of most of his friends, one of whom sold him out. Another friend denied his friendship out of fear. Jesus was crucified, laid in a tomb, and then emerged from that tomb in a different state than when he went in.

The Christian world has focused on his crucifixion as though it was the purpose of his life. What he lived and what he taught is often minimalized. And what he taught was revolutionary. He was dedicated to revealing the spirit of love that was his nature, and he invited all to know that same truth for themselves. He was an example, not an exception. He declared that for those who took his message seriously, “The works that I do shall he do also; and greater works than these shall he do….”

His message was love. His invitation was to “Love one another, as I have loved you.”

It has been said you never step into the same river twice. The factors are always different, and so are you when you enter into the river. On this Easter morning we have a chance to consider this story as we never have before. What we consider today can be different from any other time.

I say that the crucifixion was an unfortunate outworking. The story has been created that he came to die. I believe he came to live and to show people how to live.

The simplest message I know today is “Love won.” We have a chance to release all the untruths that have been spoken and step into a new river to honor the gift that was given. Jesus was an example, not an exception. He was a revolutionary person.

I invite you to be part of that revolutionary way of thinking. Love is the answer. Evolution is defined as a slow, gradual process. Revolution is a turning. It is a decision to go a different direction. People honoring the evolutionary urge create a revolution in a world that is resisting the urge of love within them.

As a girl, I heard the Easter story and I always felt such deep grief. It was so painful. Here was this amazing man offering light to the world, and he was murdered by the state because he was making people uncomfortable. When I heard the words he spoke, “Father, forgive them; for they know not what they do,” I felt it was about him, the man, being special while no one cared. As I reflect on these words today, I believe he was addressing the missed opportunity. I tried to show them and they didn’t listen. They didn’t realize what I was offering them. I repeatedly invited them to the revolution.

The salvation he was offering was not because he was crucified. He was offering the key to life, the opportunity to know that the kingdom of heaven is within you. Inside, you are a Sun—a Being of great love and almost inconceivable light.

There is a Hawaiian prayer process called Ho’oponopono. It has nothing to do with blame or judgment. It allows a blessing to be extended and a powerful vibrational shift to happen when the words of the prayer are spoken:

I’m sorry.
Please forgive me.
I love you.
Thank you.

I’m sorry. Please forgive me. I love you. Thank you. There is the story of a physician, Dr. Hew Len, who was a masterful practitioner of Ho’oponopono. He was invited into a facility for the criminally insane in Hawaii. There was a lot of violence there and it had gotten so bad that people were afraid and weren’t showing up for work. They invited Dr. Len to come in and try to turn things around. Through the practice of Ho’oponopono, over the period of three years people were healed. And so the facility was closed down.

How miraculous it is to simply love in the face of situations that come to us. When our heart is troubled, or when the circumstance feels unresolvable, love finds a way.

On this Easter morning, the story of the crucifixion of Jesus seems so unresolvable. This prayer allows something to be transformed.

I’m sorry.
Please forgive me.
I love you.
Thank you.

Easter is a story from a long time ago. Yet the revolution of consciousness that Jesus brought is still needed today. A revolution is required to change the way we’re seeing the world and the way we are relating to it. As Pope Francis said recently, we need a revolution of tenderness. Let us see Easter as a success story. Love won. It didn’t need to happen the way it did in Jesus’ day, but his message of love lives. You too are a Being of love.

There are two phrases I’ve used in my life to assist me to stay true to that teaching. Don’t let anybody take your crown, and don’t let anybody take you off your throne. Stay in your rightful identity as a Being of love. You can deny it, but no one can take that away from you. Each beat of your heart is a miracle of grace, given by the One that does in fact love you. Love itself is what is keeping your heart beating.

You have to choose to participate in the revolution. It looks different when we live in a world oriented in love as opposed to fear, intimidation, aggression and injustice. That doesn’t mean that stuff is not in our world—it is. There are many people doing things that are not the revelation of the holiness of who they are. They have forgotten; they may never have known; and they need help remembering.

I want to read this poem that is in David Karchere’s book Becoming a Sun. It is called “Love in All Its Glory.”

Love, in all its glory,
reveals itself to the
tranquil mind
and thankful heart.
So draw near to the majesty,
embrace the peace within you,
and so be embraced by love itself,
which is in your every breath.
This is the day
to let go of all old things,
and even if you have been born
many times before,
to enter this world now
as if for the first time.

Here is my prayer, which I invite you to speak with me:

May I, like Jesus, be an example of the Spirit of Love in living flesh. May I invite others to know that this does not have to be the exception but the new norm.

I was about five years old, when a kid around the block – I imagine, Catholic – told me about hell fire one afternoon. Instead of feeling terrified, I sensed how ridiculous! Even at that age, there was something inside me did not resonate with such a fate; of an angry god who would condemn me to the abyss.

In my Christian upbringing, I could never fathom the message of death on the cross; that Jesus died so we could live. It seemed too close to my being born in the aftermath of the two World Wars, where the common man was invited to lay down his life is service to his country. To die to save others; to save a country. I am fortunate to have lived my life in peace-time.

I think the Love Revolution was the true message which has made the story of Jesus extend down through the centuries; it could have ended, Jesus the failed prophet, a paragraph in a religious text. But his message of love has survived!

So now we are learning to see and relate in new ways, and as we learn to be part of creation, part of God, we come to see with heavenly eyes and relate with love in all circumstances. Viva the revolution of Love.

Jane, your words got me reflecting upon my life and how I’ve become a Love Revolutionary, and am taking that now into different domains. One of the things that I’ve come to see in the Easter story is that there can be a Divine purpose in the process of death and resurrection – that even this can be used to allow Thy Will to be done. I’ve reflected upon the times when I’ve been reborn, as you’ve mentioned, and most of these have involved a “death” in order to create inner space/readiness for the new “resurrection”. This process seems essential to the “refiners fire” that is one of the tools the Divine uses to fashion a person to fulfill Thy Will.

What I find sad about the Easter story is that that the Church has, in a sense, hijacked this essential life growth process and made it about religion – you either believe this Christian story or you throw the whole notion of death and resurrection out the window. The result has been that our culture has lost touch with this archetypal energy through demonising it. Instead of recognising, even welcoming, the time of “death and resurrection” that we’re in, it’s become medicalised as depression, anxiety or some other mental health disorder. Whatever it is, it’s wrong – no longer a normal part of life which leads us to greater understanding and capacity for love.

So at this time, I give thanks to God for all the experiences of death and resurrection I’ve experienced. I am a more loving, humble and holy man as a result. In my experience, this is one of the ways Love has won in me through opening my heart to ever greater capacity to love.